Taming Your Inner Critic – No One Is Immune

The Biggest Lie You Tell Yourself

You’ve fallen into the trap.

Talking to yourself in that snarky voice.

Something you said didn’t come out right. You overlooked something or someone. Didn’t get to a task you told yourself you would.

POUNCE. The voice activates inside your head. On continuous loop, the voice barks mean things. Things you would not say to anyone. Ever.

But you say them to yourself. More than you care to say. And we don’t talk about it to each other, do we?

You may be convinced that you’re the only one who talks to yourself in a wicked way.

But I’m here to tell you, it’s not true. Dads do it. Neighbors and teachers do it. Even bosses and educated fleas do it. (Well likely not the fleas. I couldn’t resist a riff on the Cole Porter song). The point is: no one is immune.

For some of us, that inner voice, the one I refer to as the inner critic or gremlin, pops in, unbidden, from time to time. For others, the critic is more persistent, it’s always in the room. Becomes inseparable from who you are.

It doesn’t have to be this way.

Why is the Inner Critic such a big problem? 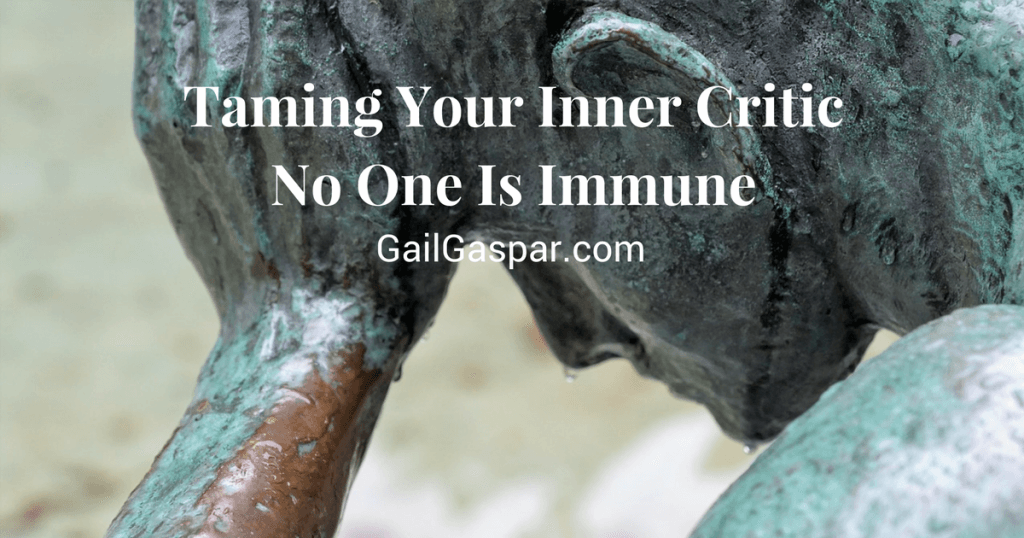 It’s a primitive, preventative, reactive response that keeps you from stretching or leaping for the better. It’s a perception that making change will jeopardize your safety, will mean DANGER!!!

Have you ever tried growing your edges from this place? No! It’s IMPOSSIBLE. It’s too loud, tight, dark, shrunken, polarizing, heavy, and threatening. It’s the opposite of fertile conditions for professional and personal growth.

4 Tips For Taming Your Inner Critic

Turns out, there are some things you can do to improve conditions and change your relationship with the inner critic.

Switching your perspective and beliefs, harnessing the power of attention and acceptance, can, with practice, change your relationship with your inner meanie for the better.

Don’t replace a true statement with I always or I never. Be kind to you. When you catch yourself falling into the inner critic trap, speak from love. You deserve it.