Figure Out Your Next Career Move [Case Study] 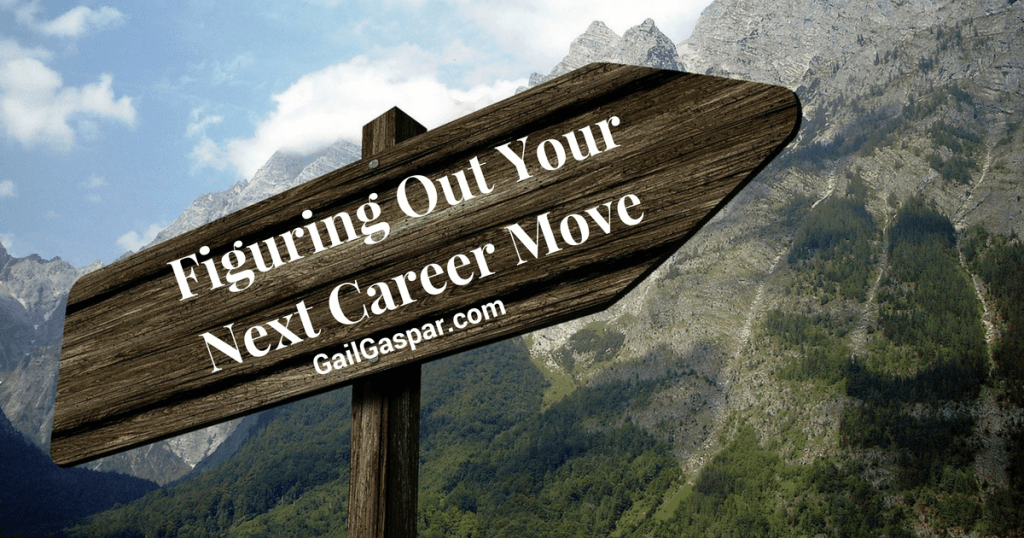 The Process Of Figuring Out Your Next Career Move

Have You Fallen Fall Into This Trap?

You took a day off, set aside time on your calendar, turned off phone alerts. And accomplished nothing.

Your inner critic shrieked things you could not shirk.

Things like, What’s wrong with me? Why can’t I do this one thing? I’m not equipped. I’m not ready! I’m not good enough to accomplish this!! It doesn’t matter. Ugh!!!

Lots of people fall in to this trap.

You may be thinking, “Nope. It’s just me who gets this distracted. Just my deficiency. My inability to get important stuff D-O-N-E.”

Thing is, you don’t talk about it. It’s not the stuff of conversation. The hopelessness. The shame of not moving faster, forward. It’s embarrassing. Vulnerable. So…you bury it. Push it down. Down deep.

Perhaps you come to accept that nothing is ever going change.

Want to hear a story?

I worked with one client who began coaching with a request. It was to help her endure five more years of a job that was choking her confidence, her marriage, her well being. It was a job she used to like but had come to despise.

Her body slouched, gaze was hollow, voice monotone. Of these, she was unaware. Work she did used to matter but it had been years since she or her work were recognized. A work setting that used to be positive but had turned negative. It took two years for her to take action to contact me.

Would I help her endure a situation that had her in a chokehold?

“Hell no,” I said. You’ve come to the wrong place if what you’re after is enduring something you hate. We’re going to shake up the status quo. How you’ve been going about making change is not working for you.

We’re here, you and me, to find out what you want next and help you get that.

Within weeks, she had squarely faced what she was resisting (for years!) and learned how to manage doubts that previously slayed her. Powerful assessments showed her what she valued now, what strengths she would align at work to make it work for her. It helped her to have outside accountability to make the changes and she was finished before her package came to an end.

She found her freedom in writing, guitar, and cultivating new connections. She found renewed energy to network which resulted in landing in front of those who would recognize and value her strengths.

You see, if you’re like my former client, you might be an Obliger, someone who needs some outer expectations to get work done.

How To Learn More About Yourself To Prevent Self-Sabatoge

Gretchin Rubin, author of Better Than Before and The Happiness Project, recently wrote a new book called The Four Tendencies, about the 4 personality types based on how we react to internal and external expectations.

After reading about it (it’s available for pre-order), I realized it gives a whole new framework of possibility for anyone who’s struggling to activate their next-stage career plan and I wanted to share the concepts with you.

In coaching, as in teaching, there is no one-size-fits-all. I create custom experiences, work with natural tendencies – not against them – as most of us are prone to do on our own.

If you’re intent on getting your next re-invention out of your mind and into being, I know Rubin’s format for understanding you will soften the approach.

Here are excerpts from an interview with Gretchin Rubin by Sean Blanda, editor-in-chief of GrowthLab.com and IWillTeachYoutobeRich.com:

Rubin’s system works like this: After interviewing hundreds of people about expectations and habits, she’s found that when it comes to behavior change and motivation, all of us can be sorted into four categories. Rubin calls them “The Four Tendencies.” They are:

You may already see yourself in one of the above tendencies. Neither is “better” or “worse,” but each kind of person has their own unique way of getting stuff done. And when you’re starting a business, knowing yourself is an unfair advantage.

(Learn which one you are by taking this quiz.)

What are some frameworks solo entrepreneurs and creative acts can use to help prevent self-sabotage?

I’m going to start with the Obligers because they have the most trouble with going alone. Obligers often make a serious mistake: They think only if they had lighter outer expectations, THEN they would make time for themselves.

I’ve talked to people who took early retirement, dropped out of school, or went on sabbatical thinking, “If only I could get rid of this onerous responsibility that is imposed on me, then I would have the wherewithal to meet the inner expectations!” That doesn’t happen. It just doesn’t.

And then people around them make Obligers feel bad by saying, “If it’s important to you, you should be able to do it!” Obligers need that outer accountability.

Obligers will also usually say things like, “I need to put myself first” or “I’m having problems getting motivated” or “I’m sacrificing my own dreams to my bosses.” No! That’s not what’s going on.

What they need is outer accountability. They could join a group. Work with a coach. They could get a client customer or student, even if they aren’t paying.

Want to write an e-book? Get 30 people signed up for a free copy. Now you have to write it. It’s an easy thing to fix once you realize what’s missing. But if all you do is sit around thinking of your motivation, that could work for other tendencies but it won’t work for an Obliger. So figure out what works for you and build it into your life.

Then take Questioners. They often have analysis paralysis. They always want more information and could spend months on something as silly as finding the perfect billing system. Remember: It’s not efficient at a certain point. Use deadlines, limits, or trusted authorities. Remind yourself of the core value of efficiency.

Upholders are pretty self-directed. But they can struggle if the rules aren’t clear. They might find it easy to be an associate in a law firm. But they find it hard to start freelancing because everyone’s freelance career is different. They don’t know what’s expected of them.

Rebels will do anything they want to do. But they have to want to. Which is why they are good at sales because they can do anything they need to in order to make the sale. And a thing I noticed, almost all Rebels in business are partnered with an Obliger. There was one woman who was like, “I’m the voice and face of the brand! I give the keynote! Then I have this partner who does things like billing, invoicing, dealing with vendors, and HR.” It sounded to me like the Rebel did the fun part but it worked for them! 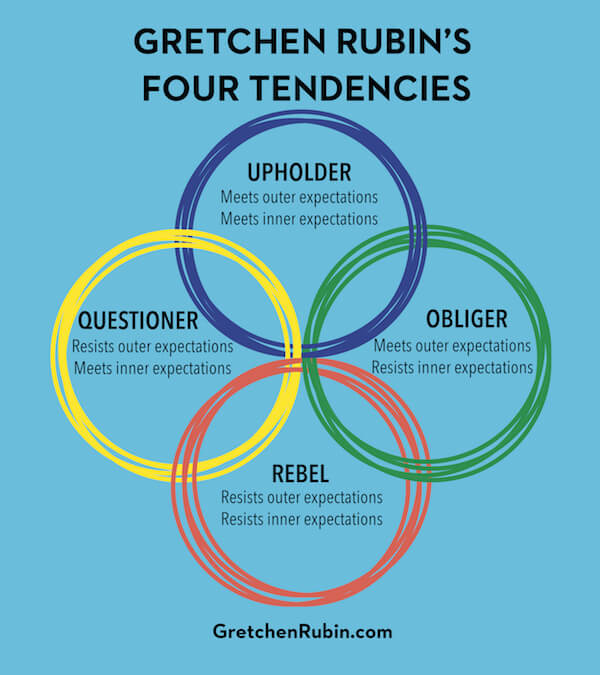 What are some phrases that tip you off to a person’s tendency?

Part of it is what we say about ourselves and part is what people say about us, especially the complaints.

Take Questioners. A huge tip off is if they talk about things being “arbitrary.” They won’t keep a New Year’s resolution because January 1st is an arbitrary date.

Upholders are seen as being rigid. Though they don’t consider themselves rigid but they embrace discipline and often have high standards for execution. They’ll say things like, “I know you want me to take 30 minutes to help you, but I have my own deadline.” You may think they are being inflexible. But in their mind, this day is completely planned out and there’s no wiggle room. That can make them seem cold, too.

A sign someone is a Rebel is if you ask them to do something, they resist. They put a lot of value on freedom of expression and choices. They’ll say, “I don’t want a day where everything is the same.” Or they change jobs frequently. So when there is emphasis on routine and schedules and set expectations, they avoid it. If you made a Rebel go to a 10 a.m. staff meeting every Wednesday, it would drive them crazy.

This is the funny thing about these profiles. Almost everyone recognizes themselves and people around them right away. Except Questioners. Mostly because they question the validity of the framework. As they do [laughs].

Leading True Challenge: Take the quiz.. Watch the video that corresponds to your tendency.

Then, I’d love to know: What is your tendency? How could awareness of your tendency inform your work? Your life? TELL US in the comments below and on the Facebook Page!